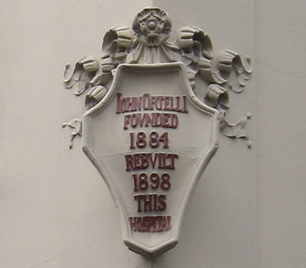 History of The Italian Hospital

The Italian Hospital was founded in 1884 by a successful businessman, Giovanni Ortelli for Italians in London. He donated two houses in Queen Square in Bloomsbury for the original hospital which were later demolished and a new building erected in 1898. In 1910 the hospital was extended as new properties were acquired. After the war the hospital reopened in 1946 with 48 beds but did not join the NHS and continued as an independent hospital.

By not being under the NHS umbrella and the changing requirements of the community the hospital suffered financial problems and finally closed in 1990.

It was sold to Great Ormond Street Hospital and the funds transferred to a charity, ‘The Italian Hospital Fund’. The building is now used for administration and as a hostel for the families of the sick children.

The Italian Hospital Fund (currently named Italian Medical Charity) was formed to continue the medical help to Italians and those of Italian heritage by the MP Right Hon. Hugh Rossi, The Italian Consul and a number of prominent British Italians.

Since its formation the charity has made grants to over 2000 separate cases to those needing financial help with their medical problems.